Been sometime…jeez I think since the 6 year celebration post…which was AGES ago. The past few years have been straight crazy with hit after hit after hit. I swear its been a fairly trying time, and I have been fighting to stay above water in a lot of ways both personally and professionally. Now however, it seems like we are finally out of the woods after some changes with free time going up and stresses going down. Throughout all of this my dude Sanjeev has been cooking up some hot fire which has been worked on feverishly in the background. Let’s run down this fire before I dive into looking forward to a whole new decade.

For the past couple of years Sanjeev,Mike,and I have been talking about the limitations of the various 5.5 toys we make. Previously if Sanjeev or I wanted to make a new figure we’d need to get some bodies, figure out what colors work with the semi limited options at our disposal, and then make the thing. This was fine, and we made some killer figures the old way. We as always wanted more though…the hunger is real you guys. Well, Sanjeev took his vast intellect into the lab, and this summer as we took a trip to PA to get into the Z HQ Sanjeev dropped the atom bomb of a near complete FULLY 3D printed figure which way opens up our options. Read HIS BLOG POST about it for all the ins and outs of creating such a body….I know enough about CAD to fill a bucket… Jeev is the GD Ocean so he straight murdered this sculpt. This new system has been dubbed Brownnoize5point5 (follow that tag on social media you should) and it is a REVOLUTION in 5.5. Fully articulated none of this penny ante no leg artic that is so prevalent in indy 5.5, having access to the .PRT files allows for COMPLETE CONTROL of the sculpt leading to all kinds of wild stuff. Rock Bodies, Beast Bodies, Tank Legs, So on and so forth, but you can see that we can do a LOT with this system. That being said I want to show you what Ive done with this technology… Yup…. Ninjas! So with the help of the BN5P5 system, and featuring a head sculpt by Hauke Scheer. (Which by the way he did a tremendous job on. I cant recommend this guy enough) I’ve created a TEWOJ Sub-line called Continent of the Ninja. Now I’m still working on the story of this whole thing, and how it fits into the larger TEWOJ story so for now I’m presenting figures with little to no lore….Never fear though it is coming. The first wave of these bad boys will be at Zolocon 2020  and there will be 2 options available what Sanjeev and I have coordinated to be called Basic and Deluxe figures. Basic figures will be either fully 3D Printed with minimal accessories or printed parts with full production limbs mixed in. Basic figures will be cheaper in $40 range while Deluxe figures will be the same as current TEWOJ figures at $65 with possible third tier “Super Deluxe” figures coming in the future at a higher price point, but lets look at whats going to be coming from old Doc at Zcon….

The Basic figure. These guys serve a few purposes. First off the show off the width of the BN5P5 System as they use 3D Printed head,torso, crotch, and accessories with full production Zoloworld limbs. This also allows me to use some of the hundreds of arms and legs scattered about from the past few years. I don’t intend on doing a ton of using the production arms and legs, but I will pepper out a few basic figures here and there as we move forward. The Evil Shadow Minion comes with 1 long Katana, and 1 Claw designed to be used in the gripping hands of production or 3D printed figures or the open palm of the Zworld production left arm. This is a full 3D printed 5.5 figure using the base BN5P5 torso, crotch, and limbs with new  feet, gloves, bracers, belt, armor, accessories and head. This whole first run of Ninja is all one off color-wheels, and some of it is going to be official to the lore while some will not be  so mostly just having fun with the wave instead of trying to conform to the story…that being said I think these guys came out pretty pretty pretty sick if you ask me. Each Deluxe Ninja comes with 1 long katana, and 1 short katana. Ive got a wide range of colors for these guys so check the gallery below to see them all.

These guys on the other hand are true to the lore, but as I said before still working on the story here so for now jsut know these guys command some forces be they good or evil…well we shall see. Like the Deluxe ninjas they are fully 3D printed, but they each come with signature accessories and 1 long katana. So there is the new figures I’ll have available at the show. You can see all of them in the gallery below. 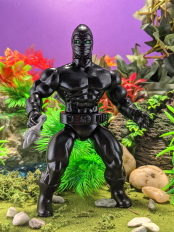 Also at Zcon will be Rampageo Press third book in a special ONE TIME LIMITED RUN OF 25! The Rampageo Industries Product Catalog features 64 PAGES of magazine (8.5×10) sized product shots from 2013-2019, and features both TEWOJ and Void Patrol. As a special Zcon run each book will be hand numbered and singed by yours truly, and will cost $10. In addition to this I’ll have copies of Jalldoonian lore Volume 1, shirts, art prints (which you’ll be able to get signed at the show by Chris Faccone and Terry Thielen…Terry making his first trip into the Z which by the way I believe Terry’s newest ROTU comic should be at the show as well, but certainly his old ones will be there to be signed by the dude.

So thats Zcon out of the way. Now what about the coming year? Well, hopefully I’ll have a couple of test prints of the second wave of COTN stuff at the show, but beyond that I’m still writing Jalldoonian Lore Volume 2, Tim and I are still working on Battle for Jalldoon series 2, and with the new BN5P5 system my options for future TEWOJ figures is bright and shiny. There will also be some new Void Patrol coming probably around late spring or early summer so keep your eyes peel here or on the various Socials. For now though it’s back to work as Zcon is mere weeks away. Happy New Year to all, and to all a good decade! Doc out!

How is this photo NINE YEARS OLD ?? #tewoj #fivepointfive #resin #slimes #rampageoindustries #princealgor #princessikari #toron #doomkick
Today's page comes from Deadly Doses: a writers guide to poisons... #books #deadlydoses #poison #doomkick
And you call this freedom? Fuck the US government (R+D), fuck these god fearing Jesus freaks who want to push their beliefs on the rest of the world, and fuck you if you support this fucking bullshit #burnamerica #fuckthiscountry #womensrights #travesty
Today's page comes from the more than complete Hitchhikers Guide to the Galaxy a masterclass in sci Fi storytelling by the great Douglas Adams. #books #thehitchhikersguidetothegalaxy #scifi #doomkick
Soooooo these bootleg Skull guys are gonna have some company soon...🤭 #112scale #skull #bootleg #doomkick
Today's page comes from one of the all time classics... Dracula by Bram Stoker #books #dracula #doomkick