The University of scale

Hey gang! Thought I’d share some of the behind the scenes goings on involved in creating Void Patrol. Having been so deeply invested in the 5.5 world for so long this switch to the smaller 3.75 scale has been a learning experience for sure, and nailing down this debut wave for VP has been a great way to dive right into this new scale.

So first and foremost as with the recent TEWOJ stuff none of this would be possible without Brownnoize. This ball joint system was first designed for the MicroClone figure. Which you should read all about in this blog post about it if you’re not familiar with, but having owned one and played with it for ages its a GREAT figure. The MicroClone is deep in the DNA of VP Wave 1 , and it’s an honor to be able to play with the system in this way.

Each VP figure features ball joints at the neck, shoulders,elbows, hips, knees, and ankles. Add in the swivels at the waist and wrists give you plenty of movement, and pose options. Believe me guys these things are suuuuuuper fun to play with. Posing and articulation has always been my main priority with this line as the 5.5 stuff while awesome doesn’t really include having fun poses for display and pictures. Trying to strike the right balance between realistic proportions, and the ability to pose correctly took a lot of back and forth on the limbs. After nailing it and having that finished figure in your hands is a great feeling though. The ball joints hold up very well (after playing with the MicroClone for years I can attest to the durability) after repeat posing, but as mentioned in Sanjeev’s blog post which I’ll quote here for ease.

“In play-testing, I’m happy to report that these joints remain tight even after a considerable amount of abuse. Unlike your typical ABS plastic toys (which are completely solid and can actually “polish out” and become loose after excessive joint use), these 3D-printed parts are actually semi-hollow. That gives printed joint mechanisms a bit of springiness that’s perfect for play! Still, after some destructive testing, I found that the old nail polish trick works perfectly: if a joint gets loose, simply pop apart the pieces and apply a thin layer of clear nail polish to one of the surfaces…wait 24 hours, reassemble, and you should be good.”

If things do get a bit loose its as simple as following those instructions and your figure will be good as new. With normal play you should be fine, but it is in the nature of limited run self made toys so it’s best to just address it head on.

So when I say these figures are 3.75 scale I realize that here in 2018 there is a few different types of “3.75” scales. These figures skew towards the vintage G.I. Joe/ Star Wars/Micronaut figures than the modern slightly bigger scale figures are made in. There is so many differences out there that I figured it was best to just forge my own way and not try and stick to the lines in existence. That being said these guys will play with other 3.75 scale line pretty nicely I think. I did do the weapons a big bigger than normal however because in this case them staying in the hands of figures seriously trumps any other considerations. So while VP figures will play with other lines don’t expect much swapping with weapons and accessories from them…sorry.

Printing of the first wave is nearly 100% done currently with only the last parts of the Adventure sets to be printed so I should be showing off final AVB’d and matted figures soonishly. One thing I did not catch until after printing is the feet. The cleanup on the soles of SOME the feet has been a bit rough, and in future runs/figures I’m going to deepen the problem areas a bit. Even after close to two years I’m still learning new stuff daily with this 3D printing game so if you get a foot and the sole looks a bit rough you can certainly burn an effigy of me on your front lawn if you like, or just realize it’s on the underside of the foot and will be fixed in the future. Not really a widespread issue or anything to really worry about, but again addressing things head on is the way to go in my book. 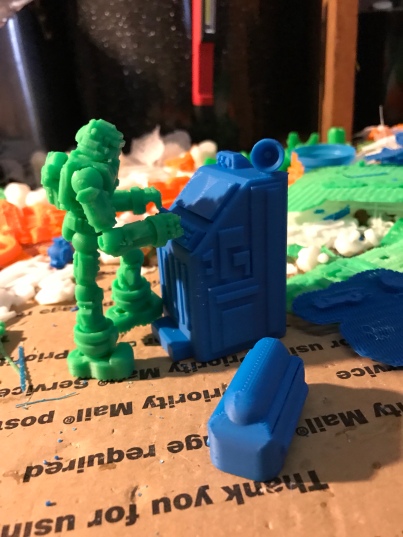 So all that out of the way here’s what, when, and who of VP wave 1…

VP Wave 1 will consist of 2 Single Figures for $25 with 3 accessories each, and one Adventure Set that comes with another figure as well as a boatload of accessories.

Each of these figures will available in Company A (Green and Blue) and Company B (Blue and Green) color schemes. These are not the final company names as i’m still thinking up cool names for them. Each figure has a different head (the other figures will be shown off in the promo pics..i’m saving some surprises for you guys!) and some other differing parts from the already shown GCT figure. This is how VP will work, shared parts between factions with differences between individual troopers. Here is the break down of Wave 1 which should be out mid May- Early June, but the promo shots should be coming much sooner once I get a full set finished and ready for their close ups.

That’s really all I have to say on the subject right now, and I have to get back to the mines so I can continue cleaning these figures up for all of you. In the interim be sure to check the Void Patrol section of the site here or the Void Patrol Facebook Page to stay fully up to date on all things Void Patrol.