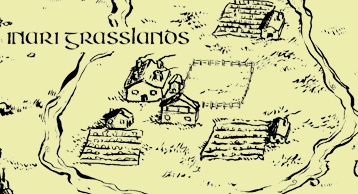 A large plains like area of The Southwest Region Of Jalldoon, the inari Grasslands borders The Vallorian Jungle , The Desert of Morose, The Field of Tears, and Barrwood Forrest. Home to many small farms and villages the Inari Grasslands sits at the center of many converging ares of the Planet making it an often visited area of Jalldoon.

The Inari Grasslands is where Prince Algor cut his teeth on adventuring, and it is also where many hapless villagers of Jalldoon are indoctrinated into Baron Dracktholme’s Shocktrooper Program. The temperate climate, and well trod nature of the region lends itself well to life. From the Inari Strider  that is used as the main beast of burden and food source in the area to the the mostly docile, but sometimes deadly Ooze Beasts many creatures big and small can be found living in the Grasslands.

Home to the City of Karnok and the entrance to Slime City the majority of the Inari Grasslands falls under the rule of Emperor Pullo and King Valdar, but Baron Dracktholme also controls the portion surrounding The Dark Citadel which makes the area either fairly safe or a nightmare for travelers.

2 thoughts on “Location: The Inari Grasslands”