Skip to content
March 8, 2018March 8, 2018 drrampageo Forces of Good, The Exciting World of Jalldoon, Who's Who

Toron Smelg has been in service of the Slime Kingdom most of his life. Enlisting in the RSF (Royal Slime Forces) at fifteen the young Slime served on the front lines of the Koomak Revolts earning many medals and accolades from his superiors.

Upon returning home he was assigned duties on the King’s Guard where he proved his worth to the young King Valdar during many diplomatic missions across Jalldoon. The two Slimes became close friends, and upon the birth of Prince Algor he was hand picked by the King to look after the heir to the Throne. Many adventures later Algor and Toron have formed a bond just like he had with King Valdar, and the Prince looks at Toron as a second father figure.

For times when he might need an edge against the evils of Jalldoon, Toron has created his Mechanized Battle Suit. The suit is capable of folding up into a small pack which Toron can easily carry with him on the various adventures he finds himself embroiled in. With the suit at full size Toron slimes his way inside the suit which gives him enhanced strength, speed, and protection. Once inside the suit the only bits of Toron that are visible are his hands, eyes, and chest which Toron uses to absorb various things as well as shoot out deadly blasts of slime to ensnare enemies. Toron has also created a new weapon in the “hard light” axe which when switched on is capable of cutting through nearly anything, and when switched off is easy to store.

Now in the later stages of life, Toron looks forward to the day he can retire from a life of adventures and relax on his estate in the Inari Grasslands, but the evils of Jalldoon may have other plans. For now Toron resides at Hawkstorm Keep with his friends who have pledged to protect Jalldoon from harm. 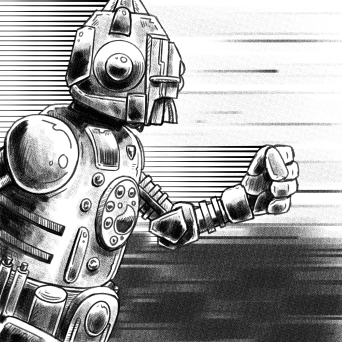